Approachable, authentic and sustainable - How the media industry is developing 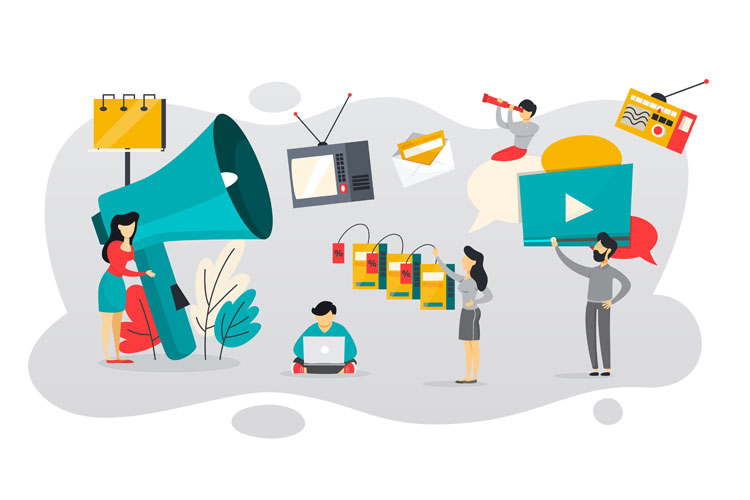 Media makers are breaking new ground. Be it platforms, sustainable film productions or synthetic voices. If you are in the mood for media innovation, you can get inspired. For example, by Dr. Gunnar Wiedenfels who opts for digital platforms and cooperations at Discovery, or Valerie Weber who wants to rethink radio. At Medientage München, a well known media event in Germany, they revealed where the journey is headed.

The media industry is on the move. How are major media companies evolving, what insights did media makers gain from the pandemic and what does a successful media company need to be able to do? We found answers to all three questions. Here are our takeaways from Medientage München, a media event in Munich.

Authentic instead of perfect

The disruptive change within the media market demands rethinking. For example, Dr. Gunnar Wiedenfels, CFO of Discovery said at Medientage that the media company was already investing internally and externally in digital platforms before the pandemic. During the pandemic, this enabled all employees to work from home. The open mindset for real authenticity in the media progressed the Discovery Group as well, he said.

It must be real: For example, a TV chef had her daughter film her cooking at home. Immediately, film professionals are bound to think of shaky pictures or awkward editing. But far from it: The film setting out of her own kitchen was well received by the viewers. Another point that TV stations of the future must learn, according to Wiedenfels, is to position themselves strategically well. On the one hand, this means looking for useful partnerships and, on the other, creating fewer dependencies in their own content. Discovery, for example, can reduce dependencies by avoiding the licensing business and instead focuses on producing its own content. The big merger with Warner expanded the portfolio. While Discovery focuses on non-fictional content, Warner completes it with a fictional selection.

The users´ needs are more important than trends

Companies want to get into the action when it comes to innovation. The innovation study by XPLR: Media analyzed a qualitative and quantitative survey of media companies in Bavaria. The media industry has noticed that the behavior of users has changed and will continue to change. A need for Action is therefore in demand. But how does a modern media company position itself? "It doesn't help to chase one trend after another", says Kerstin Deixler. The PR expert introduced the study at the Medientage 2021 in Munich: "It has to be trends and innovations that users really like. That's why the question of the users’ needs is always the first thing that media companies have to ask themselves." Daniel Fiene, known for the podcast "Was mit Medien", confirms this. Over the past few months, the audio podcast has expanded into a startup with a diverse range. "We have studied our target and user groups intensively and developed our product range from that."

Especially during the pandemic, the users’ needs changed a lot again. This affects all forms of media consumption. The usage of streaming services and video on demand has also increased dramatically, and we can predict that this will continue. That would be a starting point for broadcasters to link passive viewing habits with further selections. It would be quite attractive for viewers to be able to buy products that appear on the first screen, the TV set, directly via a second screen. This means clothes shown in the show “Shopping Queen” could be immediately offered, said Ines Imdahl, managing director of Rheingold Salon, in a panel at the Medientage. The separate set-up of a video on demand library and a streaming service seems also outdated. "For users it is not logical that there is a difference between archive and additional content platform", Imdahl noted. If TV stations were to merge their video on demand from their archieves and streaming platforms, whole new access to users could be created. Because, especially when it comes to streaming, it is difficult for TV stations to convince their users of their payment platform. Many already have a subscription to top dogs like Netflix, Amazon Prime or Disney Plus. With free access to video on demand, the barrier for the own (paid) streaming services could be torn down. The requirement is that both can be found on the same platform.

Synthetic voices find their way into the audio market

The BBC has been working with synthetic voices and presenters for years. In Germany, WDR is testing synthetic voices. For this purpose, they have borrowed the voice of the well-known WDR 2 presenter Steffi Neu. Now, her voice is used to create traffic reports or even sports news via algorithm. This is what it sounds like:

Development is still in its infancy and work is being done on pronunciation and perfecting. But at WDR they are confident that synthetic voices will find their place. What is just as important in the process are ethical standards. Therefore, the creation of synthetic pieces requires the development of ethical guidelines. Synthetic voices, however, will not stop the declining use of radio.

Radio as a projection screen for moods

Valerie Weber, radio director of Westdeutscher Rundfunk, shared some thoughts at Medientage München 2021 on how radio could make the innovative leap. Questions about the meaning of life are a driving force of society. Therefore, one approach could be meaningful programs and positionings on current daily events. This can be applied to individual stations or to an entire corporate brand. Valerie Weber does not believe that the future of radio lies solely in the newsroom. "Linear broadcast media lends itself to represent people's homes and desires," she said. One advantage of radio is its ability to convey moods with sounds and images. A clear example is music scheduling with playlists. Instead of selecting by music styles, it should perhaps be clustered by moods. If you rethink radio, you just have to question everything and reorganize if necessary. New ways of distribution are in demand. Vertical planning is no longer enough. Everything has to become more modular. And even production aesthetics must be orientated towards mobile. Everything sounds different on headphones than it does on a kitchen radio.

Sustainability is another big topic and will become more relevant in the future. Publishers are aware of this and are gradually trying to establish sustainable productions. Meanwhile, film productions are making use of so-called Green Consultants. During production, for example, they check where CO₂ can be saved. In the production of crime series Tatort, well known in Germany, CO₂ consumption could be reduced by around 30-50%, according to specialist for sustainable film and TV production Philip Gassmann. A side effect: Sometimes the CO₂ savings also lead to new artistic possibilities. But what is important in sustainable productions? Five aspects help with orientation.

Now there is even a label for sustainable film productions. On a voluntary basis, some filmmakers have committed to acting more sustainably from January 1, 2022, and all this will then be marked the Green Motion label. In addition to CO₂ accounting and the Green Consultant, the use of green electricity or the avoidance of air travel, for example, are a minimum requirement.

The industry still stands at the beginning

These developments in the various media show very clearly that the industry will change. Different media players start from different starting points. In the long term, the focus will not just be on one aspect. Truly successful will be those who include the users’ needs into their content and consider basic conditions such as sustainability or social positioning.

The charming bot - Collecting user data and workflows via algorithm