The charming bot - Collecting user data and workflows via algorithm 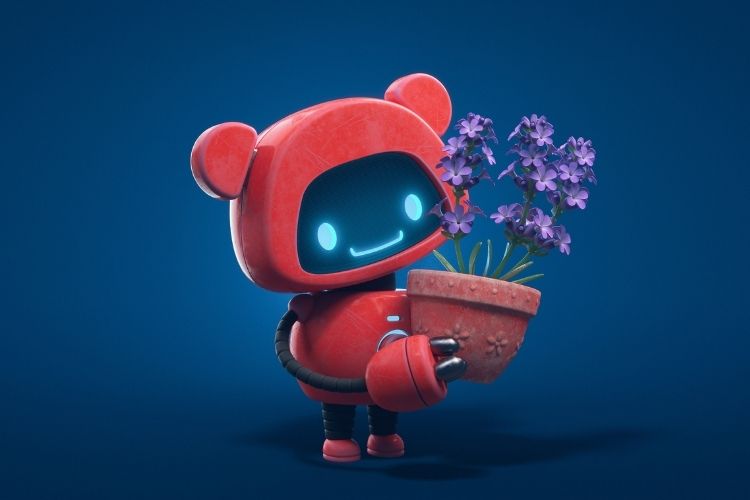 Media companies can use bots to learn more about their users and all while saving personal resources. But this requires more than just a chat window at the bottom right of the screen. Krischan Lehmann from 1E9 wants to design bots whose application is human and friendly.

For everyone who doesn’t know 1E9: What is it?

We are a platform that combines an online magazine, an online community and events/conferences. We are interested in mobility, artificial intelligence, blockchain topics and the future of food. However, we don't want to be tech nerds only, but rather talk about topics that affect society. In doing so, an optimistic attitude is important to us. Technology is often seen as dystopian, but it's supposed to help people.

How do you combine your focus on community with journalism?

There are an incredible number of people who know things better than we do. This means that as journalists, we become more like facilitators and mediators between different audiences. For example, if we have an AI expert in the network, we specifically approach them and create a publication together. In online journalism, advocacy and opinion journalism have become very prevalent. That means the journalist puts himself or herself in front. We try to step back and let the experts have their say.

Co-founder and managing director of 1E9, an online magazine and online community all about future optimism and new technologies. Before that, he worked for many years in the digital sector at Condé Nast in Munich, most recently as Director Digital for brands such as WIRED, VOGUE and GQ. He has been involved with digital trends and their impact on society for over 30 years.

As far as I know, your bot is already being used searching for experts?

We are four people and have thousands of members in the community. That's when we started thinking: How can we retrieve things? With a form, you don't feel like filling out anything after the fourth field. That's how we came up with the idea of the bot. It tells users what they need, for example, or skips queries that are not relevant. For example, in an initial contact like that, we ask what topics the person is interested in.

Why is this user survey so important for you?

By now, it's clear that you have to build user-centric products. But it also goes further than that. I used to lead a data team as well, and data-based evaluations are in our DNA. At the same time, we still have a past with print in the media houses. By that, I mean that there are few contacts between the editorial team and the readers. There might be a letter to the editor or a complaint about why a subscription was late. More precisely, it's the sales department that has contact with the outside world, the rest of the publishing house hardly has any. This changed with the internet, for example through social media. In reality, journalists and brands then go on these platforms and preach their content to the community, hoping that there might be people who are interested. We think that's rather harmful.

Why is this harmful?

Data teams look at content and evaluate clicks and similar metrics. From this, they deduce what works. However, with this you only ever see the content that you already have. Or the content that the competition has. There is little room for something really new. Polarizing and sensationalist articles usually have the most clicks. People would be interested in so much more, though. But these topics are rarely covered in the media. This is a complicated trend, because readers are now surrounded by a lot of content that unnecessarily emotionalizes or even divides society. Only clicks matter. No synthesis of opinions or consensus is sought.

I've spent years evaluating thousands of articles trying to identify patterns why something does or doesn't work. With 1E9, I can throw all that knowledge away because it turns out it can be done differently. I was amazed at what topics - even niche ones - find an audience. Celebrity news or similar tabloid topics typically guarantee reach. But we now often have articles that would be ten to twelve pages long if printed out. One example is an article about an architect who tried to dry up the Mediterranean Sea in the seventies. That had over 120,000 readers within a few weeks, with an average retention of just under nine minutes! Of course, this is also a question of delivery channels and several other factors - but still. That's an incredible number. I think we don't trust in the users enough.

And you find stories like this with a bot?

Among other things. The bot gets in touch with every new member. It greets the person and explains that it would like to introduce them to the community. Then it goes on to say that it would like to conduct a ten-question interview with the person. These are questions like “What old technology gets you excited?” or “What would you most like to change?” When the interview is done, the new member gets their text for review and may then also edit the text. If everything is ok, the person publishes the text and the bot introduces the person to the community. The bot is rather charming and this works very well. This way, many users fill out this profile directly.

That is the first time I've heard of a charming bot - what makes a bot likeable?

The way we usually encounter bots, the famous corner at the bottom right, is not exactly likeable. We made the best of it and transformed the bot's weaknesses into human traits. For example, our bot says he is an old Commodore 64 from the eighties, so he is a bit forgetful. That's quite sympathetic to the user.

We are currently experimenting with connecting Job with a machine learning algorithm called GPT3. This will make communication much more open. In initial test runs, Job prompted the person being surveyed to ask him one individual question at the end of the user survey. One person asked, “What do you make of the relation of knowledge to money?” Job then answered that the ratio was unequal. Money is much more important than knowledge, he said. Then the user asked, “Why is that?” The answer was: “Money is more important than knowledge, because money rules the world.” This triggers emotions in our users and goes far beyond simple bot interactions.

So, it's not only about collecting information, but also about the emotional connection of users. What are publishers and all media companies able to learn from this?

The already uncharmingly named “conversion funnels” could be much more personal and attractive through bots - if the bots are built well. This is not just about user-generated content and signups, but also, for example, image uploads or the queries of geographical information that can be used to display tips for events. Event registrations or multiple-choice questionnaires are also areas of application. A classic Christmas quiz, for example, can be created quickly with a bot. The bot can immediately display how successful the participant was, where they ended up in the rankings, and theoretically the bot could even send out a prize by e-mail, a voucher for example.

You have founded a startup that can advance the media industry? Then apply for the Media Startup Fellowship!

Other possibilities include: The bot could specifically inquire about preferences and interests and pick out suitable articles from the mass of content and suggest them to the user. Or the bot could ask the community and then match different people together and introduce them to each other. Many things are imaginable.

This is a lot. The name 1E9 also sounds a bit like a bot. You guys are real people, though. What's the deal with your company name?

Yes, we are real people (laughs). 1E9 is the abbreviation for one billion. When the numbers don't fit on the calculator anymore, it displays this abbreviation. They say when a technology reaches 1 billion people, it changes the world. We want to focus on technologies that have exactly that potential. But we don't want to focus on the technologies themselves, but also on the people behind them and - this is very important to us - the social impact they have.

Thank you very much for the interview.